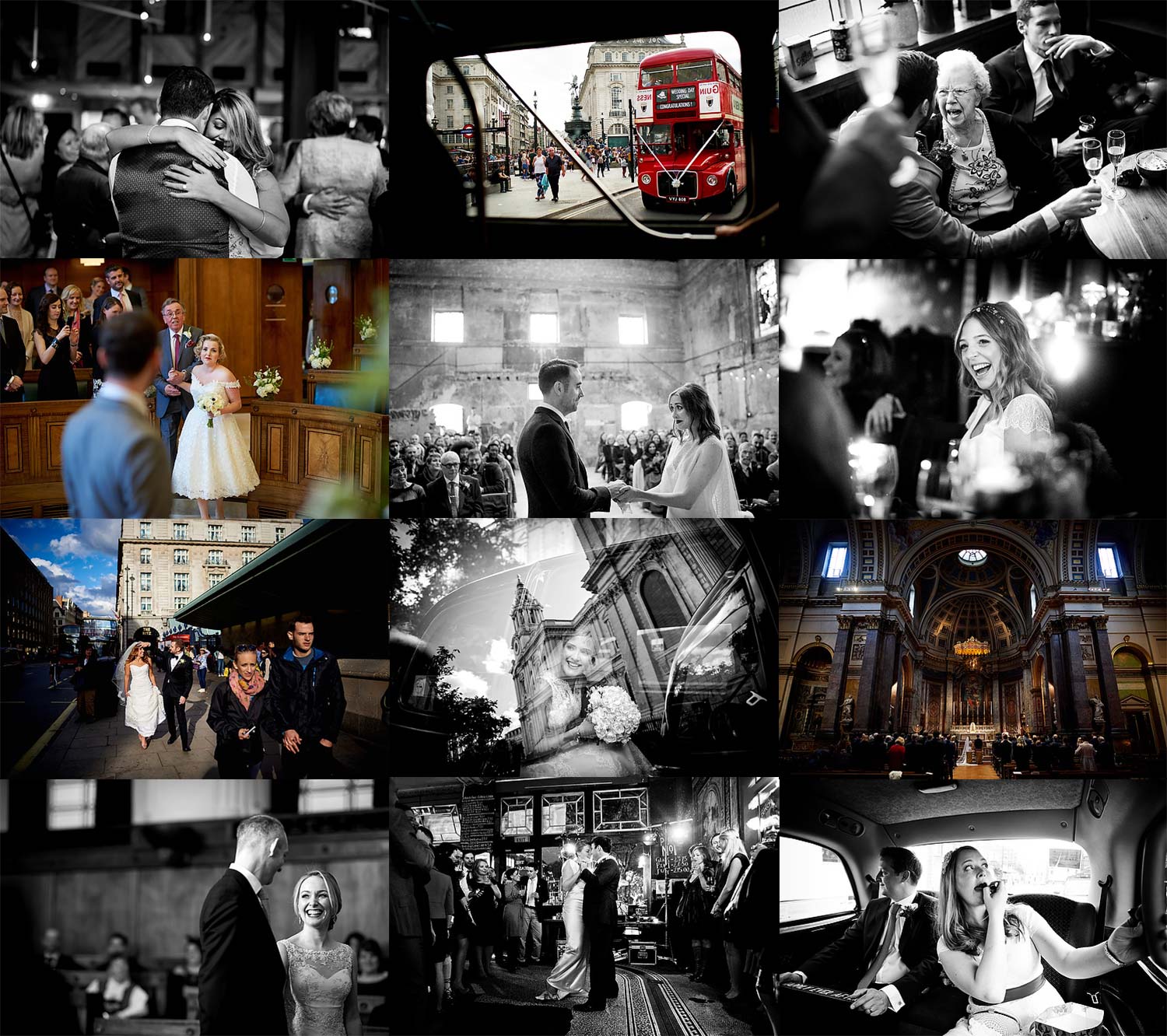 London wedding venues. After Sussex, the location where I have shot most of my weddings over the last twenty years. As you would expect for a big Capital city – there is a very broad range of ceremony and reception options, just within central London. From big cathedrals to intimate chapels. Historic locations to 21st-century skyscrapers. Working town halls and old town halls converted into hotels. Victorian pubs to smart private members clubs. Bomb ruined chapels to famous sporting arenas. You are pretty spoilt for choice. There are venues for any size or style of wedding day you may want.

The photography can be different too – more intimate than some big country venues. With ceremonies and drink receptions often in small rooms, they lend themselves to close up, natural wedding photography. Portraits can be a bit limited in comparison perhaps – maybe a side street, a rooftop or beside a canal? The lighting at many venues can be challenging too – a dark pub in winter, for example. But if the reportage style is embraced, this creates images with atmosphere – like a first dance, in a cleared space in a pub. I’ve found London weddings to be more relaxed than some ‘straightforward’ country weddings. London clerics, with a few exceptions and registrars, tend to be more relaxed about photography than their compatriots outside London.

Plus with London weddings, a common feature – given the logistics of a big city, is getting wedding guests around by London bus. It could just a trip from ceremony to reception, or combined with a tour of famous city landmarks, for those ‘out-of-town’ wedding guests. You can see images of this here.

Yes, it’s a bit of a wedding factory, it’s busy. I’ve seen three brides all converge around the front steps at the same time – going in and coming out. But it is one of the most efficient and friendly venues – and I don’t just mean towards wedding photographers and photography – that I’ve shot at. From wedding ceremonies in the main council chamber, to very small and intimate ceremonies in the mayor’s parlour. One of London’s best wedding venues – because the staff there make it so. Frankly, many registrars can be ‘prickly’ characters with their rules and restrictions. The signing of the register for example. Many will only allow some old-fashioned, posed up picture, but not at Islington. I was once asked by a registrar there if that is what I wanted to shoot when I said absolutely not, they replied: “Good, so much better when it is natural and pictures of the actual signing.” Just be ready to encounter another wedding party coming in as you leave – it’s a friendly chaos.

In the heart of the City of London – the Financial District – 30 St Mary Axe, to give it it’s correct name. The ‘Gherkin’ sobriquet, comes from the skyscraper’s unique shape. A London wedding venue with a view and the possibility of a stunning sunset vista, as your guests dine. Although as more skyscrapers appear around it, some of the view is likely to change. Still an impressive looking venue, inside and out. Even without the sunshine, it must be an impressive place for a wedding meal in the middle of a thunderstorm! A London wedding venue that is also a London landmark.

The Priory Church of St Bartholomew the Great, near Smithfields in central London. One of the oldest and most striking churches in the capital city. It’s dark and it’s atmospheric. One reason you see it feature in many films and TV shows. An early twelfth-century church, the Romanesque architecture is pretty unique in London. It survived the Dissolution of the Monasteries, the Great Fire of London and the Blitz. You’ll see it in films like Four Weddings and a Funeral, Robin Hood: Prince of Thieves, Avengers: Age of Ultron and even Transformers: The Last Knight. A very characterful venue for a wedding ceremony.

The Town Hall Hotel, formally the council offices of Bethnal Green in East London. Opened in 1910, Edwardian architecture, with an Art Deco interior, have made this wedding venue another favourite film location. A ceremony in the main council chamber, lavishly built from Australian walnut wood. A wedding in the round and nice light to boot! Now a boutique hotel, there are nice modern touches all around. A nice contained space for a London wedding. No exterior space, save the steps at the front – but on a rainy day, it works nicely. You would not know that busy London was just outside.

Royal Society for the encouragement of Arts, Manufactures and Commerce. A hidden gem, just off The Strand. The Georgian townhouse facade belies the Tardis-like feel inside. A blend of the old and new. A ceremony in the Great Room, or wedding meal, a vast room lit by a glass ceiling dome. Or the Benjamin Franklin room, looking out to the busy London streets nearby. Trafalgar Square is just around the corner – perfect for an evening stroll by wedding guests. As for the partying -– head down to the Vaults below. A contained space to let your hair down in.

A wedding at one of the UK’s best-known landmarks, St Paul’s Cathedral. The ceremony is actually downstairs, a chapel next to the tombs of Nelson and Wellington. You enter and exit from the side of the cathedral. It’s a notable place to get married but not for wedding photography. Photography is very restricted. The last time I was there, there was a complete ban on images of the ceremony. Previously there was begrudging permission to photograph through the tiny, dusty bits of glass in the closed chapel doors. (See picture bottom left below). It’s sad and rather comical, having to photograph a wedding by pressing your camera up against a door. Completely out of step with what happens elsewhere. But if images of your wedding ceremony aren’t important, then there are images around that moment in the day. One such won me the Professional Photographer of the Year award.

Royal Institute of British Architects, in Marylebone, London – just a short walk from Oxford Circus. A wedding venue with space and light – one of the best wedding venues in London in my opinion. A big, well lit (by natural light – which is important) ceremony room. A vast reception room for dining and dancing. A large exterior area for drinks, almost a ‘Manhattan’ feel with the surrounding buildings. A grand staircase for a confetti run too. Highly recommended!

A wedding reception in a grand Nicholas Hawksmoor church. What is not to like? Apart from no chance of bouncing any flash off the ceiling. Dating from the early eighteenth century, the spire once dominated the surrounding area – some of which was some of the most deprived in the country. The site of one of Jack the Ripper’s murders is just across the road – now partially buried by a car park. But a big space, with elegant columns and a high ceiling – a canvas to fill and light. Hard to believe it was virtually derelict in the 1960s. A Georgian masterpiece – a unique venue for a London wedding reception.

If there is a London wedding venue that is famous amongst wedding photographers and on the ‘to-do’ list, it has to be The Asylum Chapel in South-East London. A grade II listed early nineteenth chapel that is now an event space in Peckham. Now it’s just for ceremonies, rather than receptions but what a unique space for a wedding ceremony! A chapel that was bombed in WWII and it is that scarring that gives it so much of it’s character now. It works as a space, even on a cold, wet November, as below.

If you are looking for truly unique, for your London wedding venue – how about the home of world cricket. Lord’s Cricket ground. Getting ready in the England team dressing room (very spartan). A wedding ceremony in the Long Room. Confetti on the steps out to the pitch. Leisurely drinks on the top tier of the Pavilion, with a great view of the ground. Then eventually back down to dinner and speeches, back in the Long Room. If you like cricket?